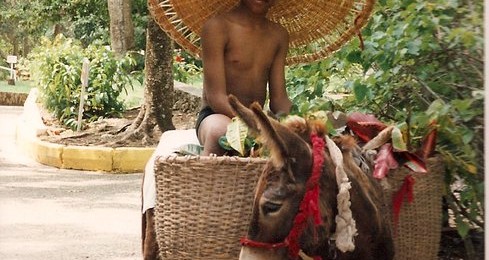 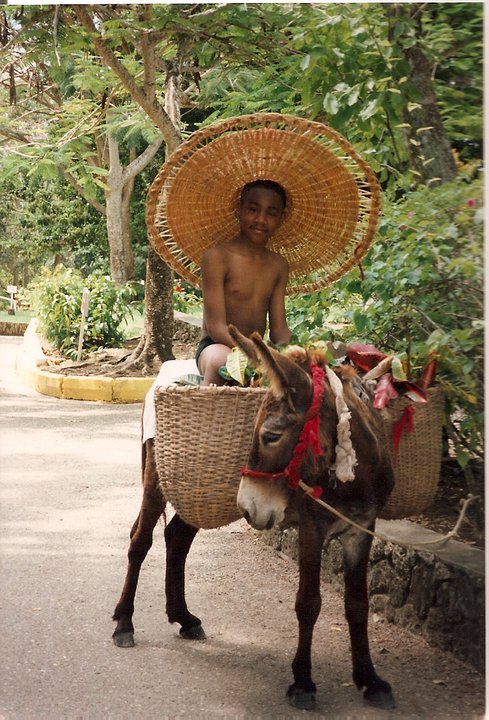 I didn’t complete the holiday task, time constraints and a busy schedule meant that although I began shooting a subject (Petrol stations a true homage to Ruscha) I have yet to get these images processed and scanned.
The image that I decided to scan and use is one of me as a child, the image was taken in Jamaica at Dunn’s River falls and ties in very closely to the situation that many black britons find themselves in and how it highlights just how cruel an unjustified the deportation of people from the Windrush generation was.
The image above was taken on my second visit to Jamaica; both of my parents were born in Jamaica and the culture in the household was what I presumed it would be like when I went to visit. On this occasion I went to stay with family who still lived in Jamaica at the time they were very welcoming and made us feel at home.
My cousin who was slightly older than me was responsible for selling paraffin to help light lanterns which in itself was something I didn’t understand the need for at the time and I was asked to accompany him to the town centre and help him. I had a great time I was treated to food, drinks  and thought it was fantastic. When it was time to return home we tried to get a taxi as we were tired after such a long day.
When approaching the taxi to go home I heard something familiar, something horrible, something that I had heard back in England  on multiple occasions and that was the Taxi driver telling my cousin that I couldn’t get in his taxi that I didn’t belong here and that the English boy should go back home.
As you can imagine at the time I was confused having been told in school (In England) that  I should go back home to Africa or wherever it is that  I came from. Interestingly as a Black Briton many of us knowingly or not have an identity crisis we are one of the very few collectives that can be considered an outsider or different no matter where in the world we are; to an extent we belong to no nation and we are reminded everyday that we are not ethnically British on an application form my option isn’t Black British as someone ethnically British can tick white British my options are Black British (Caribbean) or Black British (African) it may as well be British (Asterisk*) or what it really represents is that as the descendent of a non British house hold one can never hope to be considered truly British.
The above image is symbolic of my experience and the realisation that Black British culture and the documentation of this is important, at present Black history month and black history is usually the American Civil rights movement to whom I would be considered a British outsider, Slavery and or if I’m fortunate (or not) apartheid. In my opinion it’s imperative that true Black British history is captured and documented and this is one of the initial factors that prompted my documentation of the Windrush generation.